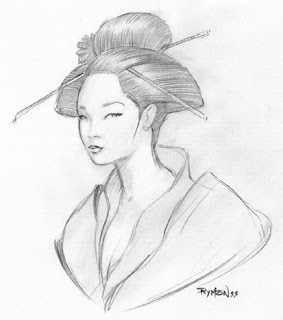 Being a DM is a pretty strange activity most of the time, but there are times when the strangeness intensifies even beyond what seems "normal" for an activity that largely involves making up imaginary stuff so that imaginary people can pretend to interact with it. And doing a fair amount of probabilistic math.

Sometimes the imaginary stuff you (or at any rate, I, and if I'm going to go through this, why shouldn't you?) come up with seems to be generated less by a process of making stuff up and more by a process of discovery, as though the stuff had existed all along, and it only took you opening up the right door or turning on the right light switch to find it. Artists of all sorts have talked about this experience -- Alexandre Dumas famously wept as he wrote one of his beloved character's death scenes (no, I won't tell you which one. Read his damn books!), and Robert E. Howard wrote repeatedly of how Conan simply appeared, fully-formed, and in a sense dictated his adventures to Howard for the Texan to write.

Anyone who cried at the end of Old Yeller proves that characters have a real existence and influence on the world. Even if that's only in our imagination.

Our imagination is what gives fictional characters their power of us. It's also where they come from. And while we may like to think that we actively "make up" things, the truth is far more complicated than that. Our imagination, after all, makes US up, too. Our whole identity is constructed by our imagination out of the endless stream of sensory input our brains manage. So if our imagination invents us, who invents our imaginations?

My Barsoom campaign was a sprawling unwieldy tale (as are most lengthy campaigns) that lasted over five years and went through more twists and turns than I can readily relate (or recall, to tell the truth). Many and varied were the characters that emerged from that lovely mess, and many of the folks I invented over the course of the tale stick with me still, easily remembered even though many of the details of who did what to whom have fallen by the wayside.

It's a strange business, as I say, this DMing gig, and it never gets more strange than in the delicate balancing act required to create (or discover) compelling characters and yet keep the story's focus squarely on the PCs. As a DM, your characters have to be supporting roles, and yet, for them to be compelling and engaging for your players, they have to be complete, with stories of their own that you need to be invested in.

But not too invested. The trouble comes in that of course, the characters you discover (or create) come out of youself, and so reflect truths about you. There's no avoiding that, and it can get downright uncomfortable to realise it, especially when you look back over some of the characters you've created. Or discovered.

You can read too much into that, of course, but the truth is this question of creating or discovering is kind of at the heart not only of the DMing process, not only of the artistic process, but of the process of self-discovery.

We're all story-tellers, no matter how inarticulate we may be. Human beings are story-telling creatures and we understand the world and ourselves primarily through the stories we tell. We know ourselves as the stories we tell about ourselves, and those stories are both discovered and created as we go through our lives. We recognize a trend in our behaviour, or we invent one; it's all the same. It all becomes part of the story of who we are.

Artistic creation, and for a DM, the creation of characters, is part of this circular process, both creating newness and discovering what was already there. My characters, the great ones that is, the ones who seemed to have ALWAYS been there, and who even now must be carrying on with their imaginary lives, those characters both revealed truths about me to myself, and allowed me to create truths about myself. The legendary beauty Yuek Man Chong, born of a margin note scribbled without thought, nearly took over my campaign, had to be destroyed, and yet filled up pages of notes and thoughts and speculation. I don't recall ever inventing anything about her -- it was always as though I was learning more and more about who she was, who she had been and who she might yet become. She was bigger than me, as strange as that seems to say. But the process of discovering her was really a process of discovering me, and realising that I, too, am bigger than myself, because I always hold the ability to go beyond what I am now, what I understand myself to be.

When I make up imaginary people, I'm really creating new possibilities for myself, or discovering new terrain within the familiar landscape of myself. Which is a pretty cool thing to do while pretending to kill orcs.