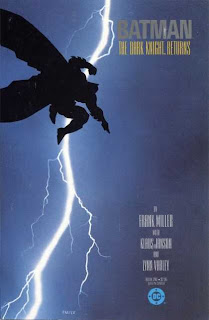 So Joshua's given a great introduction to the early days of pulp, and how that word has shifted in meaning from a particular medium to a broad-ranging style popular in all sorts of media.

But these days, the pulp aesthetic holds more artistic weight than it did in its origin days. It's not a pure pejorative anymore as it once was. And the real difference is Indiana Jones.

At the dawn of the 80's Spielberg and Lucas put together their love of low-brow narrative with a sophisticated bit of story-telling, and the tremendous performance of Harrison Ford and came up with the model for "neo-pulp" -- new pulp.

The pulp aesthetic married to sophisticated story-telling. Raiders of the Lost Ark, even more than Star Wars, was the movie that proved you could make, if not "serious art", at least "grown-up art" that was full of slam-bang action and over-the-top gee-whiz sequences. The idea embodied in Raiders spread, and in the very early 80's comics creators like Frank Miller and Alan Moore began turning THAT medium upside-down with savage, intelligent tales about ridiculous characters. While at the same time, writers like Glen Cook and Steven Brust were doing the same to fantasy fiction. It was a pretty thrilling time to be a genre fan -- this stuff was still very much marginalized, even with the immense success Lucas and Spielberg were having, so it was pretty much impossible to explain to anyone who wasn't in on the secret what was going on.

But even as a teenager I knew what I was seeing. I knew Frank Miller had changed the game forever with The Dark Knight Returns, just as I knew what Cook was doing was something genuinely new and exciting. The 80's were the time when punk grew up and got smart with bands like Nine Inch Nails, when rap hit the mainstream with gangsters and revolution and in general just a massive confluence of ideas and craziness. Anne Rice's lurid vampire tales, beginning with Interview With The Vampire, launched a huge wave of horror enthusiasm we're STILL watching roll past.

It took a while for all this to be recognized, and the label neo-pulp is not a twenty-year-old one. But it seems that in many ways pulp has been growing up all this time, across every imaginable channel, and it's really hit the mainstream now.