Gun-Fu: With A Bullet, the first adventure for the Gun-Fu: Balletic Ballistics d20 mini-game has racked up its first review online -- four stars!

This is Gun-Fu where shell casings rain like water, and a duffel bag full of guns is standard equipment.

Yep, he caught the important bits, alright. Good review all round.

The Xena: Warrior Princess episode "A Comedy of Eros" is curiously mistitled -- it's much more a reworking (using the term very loosely, of course) of A Midsummer Night's Dream than A Comedy Of Errors. But what's in a title?

The great thing about fantasy is that it lets you tell stories like this, where characters just senselessly and without warning fall in love with each other, and you can absolutely have it NOT be their fault. If this weren't a fantasy, these people would be lunatics, and we'd be unable to watch the story. It wouldn't even make sense to us. But because it's fantasy, and there's a giggling little goofball with a magic bow and arrow running around behind the scenes, we accept the inevitable chaos and enjoy the anticipation of each wacky plot twist.

There's something to be said here for UNREALISM. Steph and I have talked at length about why authors write fantasy, and one of the notions we've come up with is that fantasy allows you to talk about things that reality doesn't. Xena takes place in the same place Midsummer does: in the forest of the imagination. In this place, characters can endure pressures and influences that are personified in ways that a "realistic" show could never do. Which lets you focus on exploring aspects of human nature in, sort of, isolation.

So for example, "A Comedy of Eros" lets the storytellers look at how people REACT to love, without worrying about how they fall in love in the first place. Without the bow-weilding cherub, the story would have to explain how Xena falls for Dracos, or how Dracos falls for... and so on. But the story's not about HOW people fall in love with inappropriate objects but rather how people can, even in the face of otherwise-all-conquering passion, exercise their will and their faculty for reason to maintain control over their own destinies.

Which is what Xena was always about. Xena did terrible things. She was hate-filled, angry and selfish. But using her brain and her heart, she was able to behave like a rational, compassionate person. At its best, the show bore witness to the human capacity for re-definition of the self.

"A Comedy of Eros" isn't quintessential Xena. There's no Kevin Smith smirking deliciously as Ares and there's no Hudson Leick out-loonying Lucy and heck, the climactic sequence isn't even a fight; it's the best live-action "Hallway Full Of Doors" sequence ever filmed. But it does express the core idea of the show. When Xena overcomes her own feelings and is able to see clearly what's going on (and come up with a solution that saves the day and STILL lets her express her misguided passion), she is re-defining herself consciously in an effort to do what she knows is the right thing.

Our temporary passions can mislead us, but they only do so through distraction. Our priorities and our standards don't ever go away; we just trick ourselves into thinking we can ignore them just this time. At its best, Xena reminds us that exercising our will and our capacity for reason is our best defense against cruelty and unhappiness.

When The CBC Works Again

Can it be as cool as the BBC? Can we have stuff like this?

Look! People in Afghanistan are pretty much exactly like people in Canada, only poorer. Who'd'a thunk? 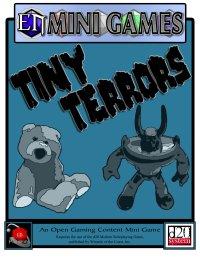 The Mini-Game of Toys, Nightmares and Monsters Under The Bed

Tiny Terrors is a brand-new d20 mini-game that lets players take on the Boogeyman and other fears of childhood, fighting for innocence and childhood spirit as living toys, sworn to defend their owner against the REAL monsters under the bed.

The forces of nightmare are on the march, targetting children all over the world, lurking under beds and in dark closets, down in the basement and up in the attic, hungry for the innocence of their prey. The only thing that stands between the minions of the Boogeyman and his helpless victims are toys, righteous defenders of innocence. Action figures, construction kits, stuffed animals and even security blankets rise to answer the call to duty, taking on the Boogeyman and foiling his sinister schemes.

Tiny Terrors lets you take up the role of these stalwart defenders and join the fight. With feats like Kung-Fu Grip and Die-Cast Construction, new advanced classes like Dog Rider, Collectible and Haunted Toy, and all-new monsters and abilities, Tiny Terrors proves that small scale means big fun.

Yes, sir. Who doesn't want to play a security blanket? Come on. The game is based on d20 Modern, with all-new races, basic classes, advanced classes and all the usual goodies: new feats, new skills, new monsters, new fun. You're gonna love it. You know you will. Am I ever wrong about these things?

A photographer who went through the Katrina disaster has posted a spectacular slideshow of the images he took throughout the 5 days he was there. It will give you quite a different impression than what the media has provided, and makes much more understandable what happened. And much less excusable the reaction on the part of the authorities.

It's a little long, but I very much recommend going through the whole thing. Once you get started, you won't be able to stop.

What's Going On In That Country?

Shouldn't they be trying a little harder to PRETEND they have a free press? I mean, this is hard to smooth over, isn't it?

And more tension-filled and nail-bitey than any film I know of. That's Wages of Fear.

Watching Yves Montand's Mario transform, from hopeless lout to shameless toady to smug hero, is to watch the human spirit crush itself out of existence. Sure, there's all the scary stuff, but is Mario's fate the only one available to humanity? Faced with scary stuff, do we have to turn into savages?

You can say, "Yeah but look at everyone back in the town. They're partying, they're happy together, even that schmuck Smerloff is grinning and cheerful."

But I say, "Sure, but they're ignorant. They don't understand what's happened, and they have no idea what their former comrade has gone through, the things he has done in order to succeed."

But here's the thing: the ending. Now, I don't want to give too much away, but the ending is kind of a cheap shot. I mean, everything important has already happened to this character, right? He's already given up everything, so what's up with this goofy ending sequence?

Without that sequence, there's still hope in the film. Without that last sequence, there's still the notion that survival, whatever the cost, is worth something in and of itself. But Clouzot seems to want to strangle even that, to take us back to those tied-up bugs from the beginning (The Wild Bunch, anyone?) and hammer home the point that nobody has any power over their destiny, that survival only means delaying the inevitable, and that human selfishness, bravado and short-sightedness will win out over any more 'refined' sensibilities.

But I think Clouzot over-reaches himself here; he's so eager to make his point, that we're all doomed and all we can do is grin like idiots into the maw of death, that he lets movie-land melodrama eat away at the power of his story.

"Ah," but you say, "but the whole POINT is the arbitrariness of life and death and how there's no telling when the blow will fall."

"Yes," I smile sadly, "but we KNOW this story isn't arbitrary. Stories are NEVER arbitrary, they are the result of conscious decisions on the part of the storyteller. So we know that this choice, this ending, is the result of a deliberate decision by Clouzot, and not some random act of a disinterested Fate. And knowing that, we cannot give the ending the weight Clouzot would no doubt like us to give, since it is clear he could have just as easily chosen another ending. Unlike the rest of the film, there is nothing inevitable about this ending, about this fate. It is nothing more than the hand of Clouzot attempting to draw a picture for us, saying, "See? See? Witness the arbitrary! Comprehend the incomprehensible!"

But it is all too comprehensible, and that is where the film, for all the power of the first hour and forty minutes, becomes a parody of itself. Had we ended amidst the flames and chaos and collapse, this story would have allowed us to interpret what we saw in our own minds, but this closing sequence tries to EXPLAIN to us what the story is REALLY about, to dictate to us how we are meant to interpret what has gone before.

In another sense, the story is already over; what do we care what happens? Perhaps this is why the arbitrary choices throughout the story don't offend -- they are part of the story. This final choice, in contrast, stands apart from the emotional journey, and sounds like nothing so much as the hoarse braying of canned laughter on an unfunny situation comedy.

Wages of Fear is an intense journey of suspense. But it didn't have to turn into a cartoon.
Newer Posts Older Posts Home
Subscribe to: Posts (Atom)