You Just Can't Explain Some Things

This is via Electronic Cerebectomy: 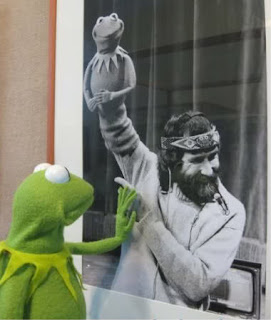 I've discussed my love for the Muppets elsewhere. This is just such a great expression of the incredible miracle that happens whenever we let ourselves embrace a story. Allowing oneself to be moved by something one KNOWS to be a lie is at the core of what it means to be human.

I miss you, Jim. Thanks.

barsoomcore has blogged here in the past about the concept of silliness bringing people together. In that vein, here's some guy named Matt, dancing all over the world.

So I only recently came across this concept, but it's just so awesome:

So amazingly awesome. Apparently it originated with this character David Bowman ("Dave? What are you doing, Dave?"), and this year's version of the contest is being run by a gentleman name of Alex Schroeder.

It's such a fantastic idea. I love everything about this. Constraints are essential to creativity, but so often, the only constraint on a GM is time. You've got a game on Saturday, you gotta get things ready, so there's your constraint. But something more formal, even if it's as ad-hoc as "you have to fit everything on one page", really strikes a chord with me. I find it so much harder to be creative if I don't put some constraints on my thinking. Inspiration so often comes out of limitations.

Now, you can take the whole idea a little further than I would, but it's still a brilliantly useful tool.

So brilliant, that we're pleased to announce that Scratch Factory Productions will be donating a copy of SLAVE QUEEN OF THE RUINED CITY as a prize for the contest winners. So break out the pencils, or the Photoshop, or whatever, and put down a page. On the left I've done up one of my own -- Flintwater's Lair, a secret grotto where the dread pirate Flintwater keeps his sloop of war, his hearty crew, and his booty. Yar. I've added Flintwater's lair to the burgeoning DINO-PIRATES OF NINJA ISLAND setting wiki, which hasn't been announced yet but is gonna be soon, 'cause it's awesome.

What other creative constraints strike you as useful for DMs looking for inspiration?

DINO-PIRATES OF NINJA ISLAND will be one of the games taking place at next weekend's SpellStorm convention here in Toronto. I'll be running MONKEY WARRIORS OF THE WALKING SWORD for up to seven fortunate souls on Saturday, Feb 20. This will be the first time running this adventure in Toronto, so this is a great chance to come see what DINO-PIRATES is all about.

You can sign up online: it's only $5 to register for the game.

About SpellStorm: SpellStorm is back for its second year! Once again at Oakham House, Ryerson University, Spellstorm is the only Toronto area convention that puts gaming first. Come join us February 19-20 for 5 slots of tabletop gaming fun.

So I was reading a "Story Hour" (the accepted term for stories that are in some way or other the output or creation of a game), and it wasn't great.

I mean, the game was probably lots of fun, and the writer was reasonably talented, so it was acceptable as far as all that goes. But it was rock-solid dull. No amount of wit or adventure could save it from its own inherent dullness.

I struggled with why that might be, and realised that in the story, our hero had no interesting relationships with other characters. The story was really just a recounting of one person's accomplishments or failures, whatever those may be, but with no sense of who mattered to this person. There was no sense that and of this person's relationships had the potential to transform the character.

And great stories are exactly about that: about transformative relationships.

So then, why so many crappy stories?


Relationships are really really really hard to model in a game -- especially a game where the modelling focuses much more on either physics or narrative structure (narrative being the darling of the current crop of game invention). But relationships are first of all, much more complicated than either phsyics or narrative. People are complicated, and nowhere more so than in how they relate to other people. Our feelings for others are so often a tangled ball of emotions and experiences and expectations that even the simplest, most mundane relationships can explode unexpectedly.

Second, and perhaps more important, playing relationships at the game table can be pretty awkward. Especially if you want to get to the kinds of emotions that drive fantastic stories. Imagining trying to play out Hamlet vs Gertrude with your buddy. How could you possibly play all the conflicting and horrifying emotions that are rocking those two people in that scene? Just even describing such things is going to be hard and weird.

At the same time, most games reward individual success more than group success -- whether through the acquisition of experience points or wealth, and the then game-significant impact of those rewards. In most games, the best policy is to play a heartless psychopath who unthinkingly betrays his colleagues. You're more likely to end up with a powerful character if you take that approach, at least, so having your character possess strong connections to other characters is disincentivized.

So, there's no hope? Games can only produce crappy stories?


Not entirely. I've been in some games that have included potent relationships -- mostly between characters who are friends, and then an opportunity for one to let the other down emerges, and tension ensues.

This is one of reasons I like character generation systems that encourage connection between characters prior to the game beginning. A group of characters who are all old friends, or at least part of a larger group of friends or relations, makes for more immediate drama right off the bat.

Take for example Joshua's latest Freeport game: the characters include Ricardo the suave womanizer and his long-time partner in crime, Lash the greedy hobgoblin. These two have stuck together through thick and thin, and just having that decision made ahead of the game helps to defuse the Heartless Psychopath type of characterization. Another pair of characters in the game likewise started out with a past, and unsurprisingly, the party is partly split into these two groups. So it's an interesting dynamic from the get-go, and there's opportunities for further interesting things to happen.

This was my favourite thing about Spirit of the Century -- the idea of having the characters all assembled via a series of pulp novel blurbs is sheer genius. So of course I stole it for DINO-PIRATES OF NINJA ISLAND.

Are there other mechanics that can successfully model the sorts of intense relationships that characterize great stories?