This past weekend, Anime North served as the launch of full-on marketing for my upcoming comic book, REFORM SCHOOL NINJA GIRLS. But I had a few hurdles to overcome:
The best thing about being in a situation like this is that no matter what I do, I'm probably going to make things better. So here's what I did.


Know Nothing: So Give

Like I said, I know nothing about marketing comic books. But I do know that everyone appreciates something valuable, something fun and entertaining.

Just printing up an ad or a flyer and trying to get people excited about that seemed to run counter to that idea, though. Whatever we did, we wanted it to be something that people would actually appreciate getting. Something they might take home, read a couple of times and share with their friends.

So we didn't know anything about marketing comic books, but that seemed like a winner of an idea.


No Budget: Work With What We Have

Anime North is clearly our target market, but we were super-tight on two resources: money and time. Every second Dave (the artist) spends doing a "special Anime North thing" is another second our backers don't get their books, and we've taken up plenty of time already.

But we do have some great material already on the website and otherwise kicking around -- the stories I've written about the girls, and of course the eight-page prologue we did last year while raising our funding. The latter seemed like it could hold some real potential.

"New Girl" has been available online for just about a year now, but only people who have been to the site will have seen it. What if we did a print run of that?

Sure, anyone can read it online, but a nice print version is always welcome, and it made for a cute little self-contained comic book. We didn't put any real advertising in it. Anyone keen to learn more, we figured, could find REFORM SCHOOL NINJA GIRLS easily enough.

I felt particularly vindicated when the very first person to look through it exclaimed, "I'm so glad there's not a big ad in the middle of this!"


Nobody Knows Me: I Know Some People

A free comic book for anyone who wanted it, no strings attached, seemed like a solid offering. But how to get it into people's hands? We didn't know anybody at the show.

But I've got friends. So I asked everyone I knew if THEY knew anyone who would be working at a table at the show. And it turned out, a few did. One of my co-workers was even working a table at the show himself. Man, I'll tell you, learning to ask my friends for help has been one of the most life-changing lessons ever.

So we got ourselves passes to Anime North and schlepped in a few hundred copies of New Girl, and they got handed out with every purchase at a couple of big tables there. Right into the waiting hands of the very people we're hoping will buy this book.

Without any knowledge of marketing, with a minimal budget and just by exploring our network, we were able to get about two hundred copies handed out over the course of the weekend, which means (if each one got passed to at least one other person) we reached around 400 people -- people who maybe had never heard of REFORM SCHOOL NINJA GIRLS before, but who we know are interested in non-mainstream, Japan-themed comics.

Not bad for a couple of guys who don't know anything about marketing comic books.

We've still got more than a hundred copies of this little mini-comic -- if you think you could do some good for the cause with them, let me know and I'll send you a bunch!

Here's a simple way to incorporate high-quality audience questions without disrupting your talk or presentation. I wish every panel and presentation did this.

See, I hate Question and Answer sessions. I mean, I really HATE them. Whenever an event or a presentation or something wraps up, and the host or the presenter says, "Are there any questions from the audience?" -- that's my cue to make a break for the exit.

I know what's coming, and so do you.

The same five or six questions every presenter gets: How did you get your start doing this thing I totally wish I was doing only I haven't worked up the guts to do it myself? Will you listen to me pitch my idea to you right here in front of all these people, because I don't believe in my idea enough to pursue it myself without your approval? Let me tell you a story that will prove I belong up there with you, and not down here with these other people.

I'd rather pour bleach into both my eyes.

So when I was asked to host a panel at this year's Mesh conference, I knew I had to find a solution. Of course, there ARE great audience questions (man, I had a KILLER question for Jackie Chan when he did a talk at last year's TIFF, but they shut down the mics before I got a turn. Mostly because everyone before me was trying to pitch their ideas to Jackie. Not that I'm bitter), but how could I get those into the discussion without subjecting everyone to the dreaded "open microphone" that kills a presentation stone dead? 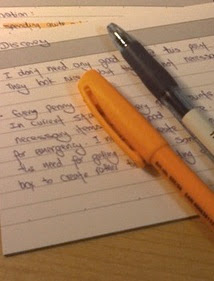 A handy trick from the GM's toolkit came to the rescue -- the humble index card.

What I wanted for this panel was a free-flowing, smooth conversation that felt more like a thoughtful salon conversation than a structured panel. I had some questions for the panelists prepared ahead of time, of course, but the last thing I wanted to do was to cut off the conversation in mid-stride, turn to the audience and say, "Okay, now who has some questions?"

So I brandished my index cards at the crowd. Whenever someone wanted to add a question to the discussion, they just caught my eye and I rushed over to give them a card for them to write their question on. When the card was returned, I added it to my stack of questions, and then whenever there was a break in the discussion, I could jump in with a "Here's a question from one of our audience members..."

Often the questions seemed to flow naturally from the ongoing conversation. We never had to interrupt the entire discussion just to surface one person's idea, but anyone who wanted to contribute could.

We got through every single one of the audience questions, and many people commented on how they appreciated the way it was all handled. The questions were (perhaps because people had to really think their question through before handing it in to me) very high-quality -- interesting and taking the conversation in new and thoughtful ways.

I really enjoy hosting panels and facilitating discussions, and this one went really well. And I'll be using my index cards at every one I do from now on.
Newer Posts Older Posts Home
Subscribe to: Posts (Atom)