Creating a character is a necessary part of any role-playing game, but in a lot of games it's not exactly a fun-filled exercise -- unless your idea of "fun" involves filling out lengthy forms and conducting a lot of tedious arithmetic. I've discovered over the years that introducing someone to role-playing is a lot easier if you can jump them past the forms and arithmetic. For a lot of newbie games I've run, I've just provided pre-generated characters and folks of all sorts were able to dive in and start having fun right off the bat.

Whereas if someone's first experience with gaming is receiving a two-page form and a 300-page volume of rules they need to digest and make selections from, their enthusiasm may not be sufficient to carry them through.

So it might thought that the best route is to just do that whole pre-generated characters thing and skip all the arithmetic, selections and form-filling-out.

(I'll be honest, I kind of like filling out forms)

But a number of game designers of recent years have solved this problem in an entirely different way. Instead of skipping all the tedious character generation stuff, they've designed games in which the process of character generation is actually FUN. It's a pretty amazing concept, especially in this hobby where it often seems like "fun" is really only a side-effect of arithmetic and forms.

The Dread RPG has a fantastic questionnaire method of character generation that engages the player's imagination and helps to insure their character's personality and history relate directly to the progress of the game. The crazy Spirit of the Century game from Evil Hat has players describe their character's adventures as the breathless, florid blurb of a pulp adventure novel, and then combine each other's characters into each other's novels. Ad Astra Games' Minimus RPG (link downloads the PDF) links up each character into a web of relationships that are then used to drive the story.

The current DINO-PIRATES OF NINJA ISLAND character generation system uses a variant of the Spirit of the Century system -- players describe their character's first interactions with dinosaurs, pirates and ninjas, and other players hook their characters into the stories that come up. The idea is that you come up with some fun past events, and a party of heroes who are connected to each other by more than just the convention of the gaming table.

It works... kinda. Much like I've found with the Fate system, this practice requires some pretty good story-telling skills on the parts of the players. Players who aren't so adept at slapping quick plots together struggle with this. I've also found a tendency for players to create stories that, in a sense, lack openings for other characters to jump in. It's also somewhat awkward to just sit there and say, "Okay, someone tell a story... now someone add to that story..." -- folks are shy (especially a group of players who don't know each other very well) and so there tends to be some awkward silence and uncertainty about who ought to be doing what when.

So I've decided the DPoNI character generation system needs a little more structure. The Minimus system is very interesting in that regard, with its quick lists of events, people, and so on. I'm also thinking of enforcing the idea of character generation as a communal activity, so that players don't show up with their characters so thoroughly defined that there's no opportunity for other characters to enter their history. I'm thinking of something whereby, say the first player to the left of the DM describes how their character first encountered ninjas. The next player weaves their character into that episode, and then describes their character's first encounter with pirates, and so on around the table. That would help to keep things from being too thoroughly defined, I think.

The Gift of Attention 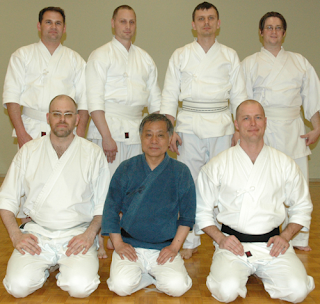 This past May I was thrilled to be able to attend Sugino Sensei's seminar in Sherbrooke, along with a large number of other Katori Shinto Ryu practitioners from both Ontario and Quebec. For three days we practiced under Sugino Sensei's keen eye. The experience brought back to me thoughts I'd had years ago, about how precious the gift of attention can be.

And while of course receiving such a gift is something to be treasured, in recent days I've been thinking of how simple it can be for any of us to GIVE such a gift as well.

When I face my partner in omote-tachi, or even when practicing kamae (the stances that form the foundation of Katori Shinto Ryu), I am most useful to them when I gift them with my full attention and spirit.

I don't mean that we must put on a fierce face and pretend to be locked in mortal combat, or try to intimidate or startle them. But we can give our attention to them completely, letting nothing distract us from their action. Not only with our eyes, but with our entire being as we perform the kata alertly, attentively, and with a fully present spirit.

It is so rare in our lives that anyone truly pays attention to us. Most people spend every moment consumed with self-reflection, condemning themselves or praising themselves -- usually without nearly as much cause as they imagine -- that they have little energy left over to consider others. Our own lives and worries are so important to us that we ignore the people all around us. This behaviour keeps us from learning, but just as important, it makes it hard for those around us to learn as well. When they do not receive our attention, they do not receive useful feedback that they can use in their efforts to learn and transform.

The practice of Katori offers us an opportunity to put our self-centered concerns aside and engage with others openly, presently. When we perform the katas, if we remain trapped in a selfish inward struggle, we fail to give our partner what they most need at this moment: our attention. This is one of the qualities that makes a teacher like Sugino Sensei so effective -- he sheds himself and focuses entirely on what the student is doing. It is a lesson to myself that regardless of how poor my technique may be, or how tired I am, I can still be of tremendous value to my partner simply by paying careful attention to them.