What does "pulp" mean? It's getting bandied about a lot lately, yet it seems that any official definition that coincides with what I mean when I say pulp doesn't exist. Rather, the word has grown a kind of gestalt definition over time, and that's what most people mean when they say "pulp." If you'll forgive me a paragraph or two of level-setting, let me throw out some background. "The pulps" were, of course, the magazines printed between the late 1890s and the 1950s on cheap, pulp paper. That doesn't say a whole lot though; spiritually, they were the successors of the penny dreadfuls and the dime novels; cheap writers, publishing stories on cheap paper in a cheap format. Low brow entertainment at it's least pretentious. Don't get me wrong; the pulps churned out some good material. A lot of really famous writers got started in the pulps before they graduated to more prestigious venues, and entire genres made their first appearances in the pulps.

The pulps faded significantly during the paper shortages during World War II (I'm not sure why there were paper shortages during the war, except that presumably folks were otherwise occupied and therefore couldn't churn out paper) and by the mid-50s had pretty much faded altogether. The "sweats" replaced them, to some extent, they had cheap thrill stories a la the pulps, and pin-ups. Since the sweats were themselves replaced by honest to goodness girlie mags like early Playboy, you can see that the successors to the pulp format never did really acquire a whole lot of respectability. For the stories themselves, cheap mass market paperbacks replaced the pulps as the format of choice, and remains so to this day. Due to the demise of the pulps, there isn't really a market for short stories anymore, and novels are written as novels, not as serials that are later converted into novels.

But that still doesn't answer the question: what do you mean when you say pulp? It's not a genre, because the pulp magazines covered stories in nearly every genre under the sun during their heyday. Perhaps it's more of an aesthetic. Because the pulps themselves were materially cheap products, and the writers were also cheap, the pulp stories had a tendency to focus on cheap, often even gratuitous or lurid thrills. These were not deep, introspective stories about the human condition, they were fast-paced, high octane stories with characters that were often over-the-top melodramatic, and plots that were almost farcical in their outrageousness. Yet, they were treated straight (mostly) and taken seriously by the authors. Pulp to me, then, means fast and furious action, gratuitous and cheap exotica and probably even gratuitous, cheap erotica too. Being cool and making a reader say, "Wow, that's swell!" were more important than being relevent or realistic.

So pulp as an adjective isn't limited to the pulps, or even the written word. The old Republic serials can be retroactively called "pulpy" because they had a lot of that same aesthetic. Comics can be pulpy (how much difference really was there between the original Flash Gordon material and John Carter of Mars anyway? Thematically, they were on the exact same page). Movies like Star Wars or Raiders of the Lost Ark very purposefully cultivated a pulp feel. And gaming can entertain a pulp aesthetic, and in fact the default condition for the original roleplaying game and the mode in which it was played is, arguably, very pulpy.

Anyway, I'm not 100% sure what that has to do with gorilla pirates, except that my exploration of pulpy things over the last year as led me to that idea. It's rife with pulpiness; it's silly, yet I've used it relatively straight, it's outrageous, it's exotic---and notably, people who are not fans of the pulp aesthetic don't get it.

So, last night I was stuck working on a project (a turtle shell made out of a cardboard box that needs to be a costume for my 5 year old) and with my craft acrylics out, and time to kill while waiting for paint to dry, I decided that I was frustrated enough with my inability to find a decent picture of a gorilla pirate online anywhere, and that it was high time I made my own. I've never used craft acrylics for art before, and they're obviously not all that highly suited to the task. Also, I have crappy brushes, crappy regular old typing paper, and I just whipped this up in (relatively speaking) a few minutes while waiting for paint to dry on a more pressing project. But, here it is. The gorilla pirate. A pulp archetype in the making. 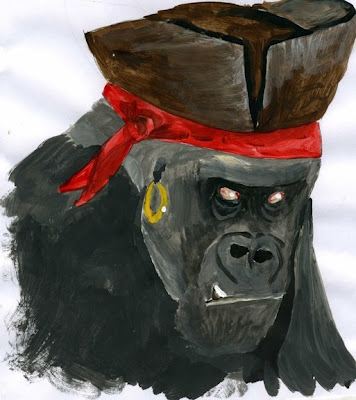