Well, since it's come up, the idea of crossing a pulp aesthetic with something else brought to mind a theory of mine of game design. Or rather, of game design on the GM level, not the writer or developer level. Setting design, if you will. And oddly enough, it's a half-remembered something or other that Corey once said in a posting on rpg.net years ago that stuck with me and sparked the thought in the first place.

It occured to me a long time ago that I had reached a point where I found traditional high fantasy rather boring as a gaming mileu. For that matter, I wasn't reading much high fantasy anymore either. For someone who cut his teeth as a junior high kid on J. R. R. Tolkien, C. S. Lewis, Lloyd Alexander, Raymond Feist and whatnot, I found that a strange, unexpected, and possibly even a little bit frightening development. So I decided to take it down out of my subconscious and analyze it.

Two things occured to me. One of them was merely the idea that doing the same thing over and over again does tend to get boring. That was easy. The other, though, was that High Fantasy, despite its prevalence in the gaming community, in many ways is not well suited to gaming.

The "tropes" and conventions of High Fantasy usually posit a humble beginning, pre-destined heroes, and eventually climatic encounters with the root of all evil to save the entire world. Dungeons & Dragons does attempt to address this with its leveling mechanic, the "zero to hero" mentality, but saving the world is not really a repeatable campaign goal; you do it once, and you have to start all over and tell the story again. The root of all evil becomes a boring campaign force after a while, and it does little to engender a sense of identification with the setting; how do you "make it your own?" The heroes of destiny trope is strained as characters die, get replaced, etc. Gary Gygax himself clearly envisioned D&D as a game in a sword & sorcery paradigm that had a few superficial trappings borrowed from High Fantasy (specifically Tolkien) but not really integral to how the game was played.

Not that what Gary Gygax intended is something I particularly care about, but there it is.

In casting around my net to see what I could do to revive my flagging interest in fantasy gaming in particular, I discovered that layering in elements, tropes and conventions from other genres made it more interesting. This was all before my discovery of ideas like slipstream, or New Weird (both of which I'm skeptical of, but that's a whole 'nother post for another time), but this quest of mine for something different also wasn't really something I was aware of consciously.

That's when I stumbled across Corey's rpg.net posting. I didn't really know him yet, or at best I had just started entering into online discussion with him, but here, while describing his Barsoom campaign setting, he mentioned that at the beginning he just threw stuff together without giving any thought to how it would later correllate and make sense with all the other elements. Setting jambalaya, I guess. If it was cool, in it went and figuring out what it was doing there could be handled later. 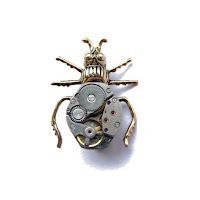 This is, if you think about it, a pretty "pulp" idea, yet if done intelligently, could be something really interesting. So, I kinda independently stumbled onto the core conceits of slipstream, New Weird and particularly steampunk as setting aesthetics, and starting using them more, rather than shying away from them in a misguided attempt to keep my fantasy "pure." I started thinking about other things---non-fantasy things---that I'd read, yet which I thought would make really cool game elements. And when I'd percolated that for a little while, I came up with my Dark•Heritage Mk. I campaign setting.

I'd gone back to some of the older pulp I'd read (but dismissed as incompatible with my D&D habit) like Edgar Rice Burroughs and said, "what if a world were more like Barsoom and less like a pseudo-Medieval Europe?" I went with a more modern interpretation of Mars than Burroughs': a cold, rusted desert, with water buried under the surface in giant aquifers. I gave some thought to technology (if nothing else to power massive steam pumps that brought water up to the surface): "pirates with guns are cool; why not have some black powder, flintlock stuff? Why not Da Vinci esque clockwork engineering?" I ended up adding wind-up bugs, like that pictured here, as a kind of replacement for messenger-boys running through urban streets. I layered in some more overtly Horror-like elements. I added in frontier areas threatened by bandits and worse that were not unlike Sergio Leone's vision of the Old West. I ditched alignment entirely, and decided that people weren't good and evil, they were just people. And therefore mostly evil. I know, I can by cynical sometimes. The urban areas (which I greatly expanded, and which often became the focus of any game I ran in the setting) started to resemble the blighted landscapes of the Industrial Revolution, and Charles Dickens became a significant influence, except without plucky heroes who clung to admirable virtues in spite of the seedy, gritty setting all around them.

And the kinds of stories I ended up telling were no longer thrilling tales of romantic adventure; they took on a darker, noir tinge, and my players started developing well-deserved paranoia. Before I knew it, I could look backwards at my game and notice a strong resemblance to the plots of Robert Ludlum books I'd read, and other mainstream spy-thriller type authors, or possibly a fantasy version of The X-files.

Of course, I had to modify mechanics to make this all work, and before I knew it, I wasn't even playing D&D at all anymore, but something else entirely, with only a few recognizable standard D&Disms, and an almost completely different paradigm about what the game would be like, what the characters would be like and do, and what kinds of challenges they would face.

And I really haven't looked back very often; this new paradigm is still where I firmly hang my hat, and although I'm not currently running this setting anymore, I'm still constantly tinkering with it, and I consider it "my" setting. One of these days if I ever develop enough self-discipline to stick with it, my partially completed novel notes and partial drafts will turn into an actual, fully-written and realized novel, set in this setting. And, with any luck, I'll start running it again, and keep doing so for as long as I can.

But all of this was made possible by the somewhat lunk-headedly late realization that genre purity was a pipe dream, and not even something that was necessarily desireable. Today, I find that I really enjoy the old Weird Tales paradigm, straight from the pulps (specifically, the pulp magazine Weird Tales. Duh.) Fantasy as a literary genre hadn't really even been invented yet, science fiction and horror were nascent, and what would later become strictly segregated conventions, ideas and paradigms for each of those were freely mixed and mingled. This was the way they did it back in the pulps, and the more I thought about it, the more I thought that the evolution from that stage to where we are today wasn't actually progress.

Apparently, I'm not the only person who's thought that, of course. While I didn't find anything particularly notable in the slipstream, New Wierd or steampunk genres that inspired me on this road (because I hadn't even heard of them until I was already, independently, kinda in the same place) the fact that they exist today shows that I must have been unknowingly caught up in some kind zeitgeist or something. Of course, that only makes it that much easier for me. I don't have to think of everything on my own anymore; I can look around, read books, google art, and find all kinds of cool ideas right there waiting for me to steal.
Newer Post Older Post Home