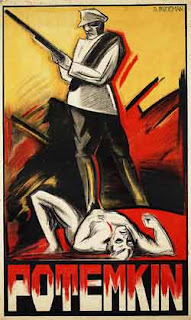 We went to see the classic Eisenstein film Battleship Potemkin last week at the Cinematheque.

Anyway, seeing it on video is woefully inadequate preparation for seeing it on the big screen. It was a SHATTERING experience. One of the most exciting films ever made, still. Ranks up there with King Kong. Bad-ass.

I defy anyone to watch that film in the theatre and NOT come away going, "I wish I could join the Communist Revolution and take back power from the capitalist overlords!" It's such an emotional argument -- it's impossible to debate Eisenstein's overwhelming enthusiasm for the revolution and all it means to the downtrodden and hopeless. But at the same time, it was interesting to note for the first time how the enemy of the revolution gets steadily less and less "faceful" as the story moves onwards and outwards.

When it's just the sailors on the battleship mutinying, the bad guys are clearly outlined for us: the arrogant captain, the sneering ship's doctor. We see them clearly and their downfall is a triumphant moment. The next round of villains (aside from the sneering facist whose calls for racial cleansing are spurned by the fair-minded brothers and sisters of the revolution) are the Cossack soldiers, marching in line down the steps, their uniforms identical, their steps perfectly cadenced, their faces never shown. They are the mass -- the undifferentiated human product of capitalist society, put to mechanical work serving their masters at the expense of the proletariat. Who are NOT undifferentiated but made up of one individual after another, Eisenstein is very clear about that.

The Cossacks are much less individual than the ship's officers were. And the final villains of the piece are even more so -- they're never even shown at all. The crews of the oncoming squadron are never on screen. All we see are the ships pumping smoke and churning up the sea, until at last the triumphant conclusion overwhelms all else and the proletariat revolution takes over the globe.

Which is I think the problem -- Battleship Potemkin is an illustration of the Communist religion dealing with the question of evil. If the revolution is inevitable everywhere, and if everyone will eventually see the truth and light of the socialist way, then nobody's really AGAINST us, are they? I mean, IF we're right, then ultimately EVERYBODY is on OUR side, so who are we supposed to fight? As the scope of Eisenstein's revolution expands, his villains MUST get more and more indistinct, less and less human. Because it's very difficult to justify running around killing other humans if they're really going to be on your side in the end. 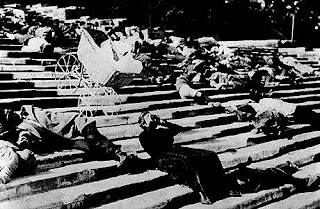 Which now brings us to demons and the problem they present.

Basically, demons are a convenient tool for telling stories, because you can have your heroes slaughter them remorselessly for hours on end if necessary. Nobody has to feel bad, cause they're demons. They're inherently EVIL. They DESERVE to die.

But in the end, what does "inherently evil" even mean? Does it mean they just do cruel things all the time, like torture puppies or talk in movie theatres? Are EVIL creatures just big meanies?

Well, it has to be more than that. Cause it's not okay to run around killing people just because they're mean. So maybe "inherently evil" means "incapable of good". Okay, so whenever given a choice, a demon does the evil thing. Which gets retarded almost immediately -- whenever somebody's talking to the demon, the demon punches them in the face. Or stabs them. This must make demon-to-demon communication kinda hard. But if the demon sits and listens politely, even if he's planning to do something really horrible later on, he's still doing something NOT evil right now. If he happened to fall off a cliff before his evil plan came together, the person he was talking to would think, "Gosh, that demon sure was a nice fellow. I'm going to be nice to kittens from now on." and suddenly the world is a better place because that demon was in it. Which means that running around killing demons "just because" actually might be a bad thing, because the demon might inadvertently be just about to do something good just when you kill him, and thus your killing him is an evil act.

Eisenstein gets around the Demon Problem in the time-honoured fashion of dehumanizing his revolution's enemies. Many fantasy authors and game settings take a half-baked philosophical approach and pretend you can coherently imagine creatures of pure moral constancy. I prefer my demons to just be people. People who maybe aren't very nice, maybe aren't very concerned with other people, but who are people acting for people-like reasons. It may be less exciting, but well, it may not be.

Thoughts on Communism, revolutions, demons, and cinema? When designing a setting either for a game or a story, what sorts of choices this way do you lean towards?
Newer Post Older Post Home