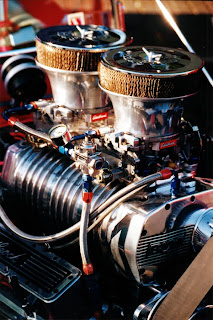 So quite some time ago I talked about adapting my Hot Pursuit chase rules for DINO-PIRATES OF NINJA ISLAND. Figured now was as good a time as any to talk about how that went, and the hot-rod approach I ultimately ended up with.

The original Hot Pursuit was reasonably thorough piece of work, including as it did a couple of dozen "maneuvers" chase participants could select from during the action. One of the problems I found with this approach was that my players were not conversant with those maneuvers, and so I had to do a great deal of hand-holding to get their actions sorted out.

Most times I would get them to describe to me what they WANTED to accomplish, and then I'd apply the appropriate maneuver to resolve the attempt.

Which is fine, and worked great. But it wasn't quite right for DINO-PIRATES OF NINJA ISLAND. I needed something more stripped down. More hot-rodded.

DPoNI is already a pretty hot-rodded sort of game, with a lot of the fancy, comfort-ride-inducing features sawn off, and a number of scary-if-you-don't-know-what-you're-doing sort of attentuations and optimizations added on. It's not necessarily a "starter" game. A DM who doesn't know how to control a game could get kind of overwhelmed by things like the Stunt rules, or Conviction, if they aren't careful. Sort of like stomping on the gas on a customized Camaro -- SOMETHING's going to happen, but not everyone is going to enjoy the experience.

So how to build exciting chases into a game like this?

The first thing I did was strip things down. The big list of maneuvers that never got looked at except by the DM? That had to go. In its place, I included the already-tested Stunts concept. The original Hot Pursuit rules were designed so that a wide array of skills could be useful during a chase. With the Stunt rules in DPoNI, skills were already useful at any time, so that took care of that.

Unexpected obstacles are a big part of any chase, so I kept the Obstacle Check system, but instead of detailing each possible type of obstacle (which in Hot Pursuit determines the kinds of maneuvers that will be effective), DPoNI leaves the nature of the obstacle entirely up to the DM.

Finally, I threw out all the opposed checks that Hot Pursuit operated on. Opposed checks have had a tough ride of late, but at least in chases, I knew a static DC was a better choice. Making it an ability check (Strength, by default) made sure that even at high levels, chases remain exciting.

Overall, the DPoNI chase rules retain the fluid excitement of Hot Pursuit, but by stripping out the power steering and comfortable shock absorbers, they transmit the power of the narrative directly to the DM and the players.

"Hot-Rod" rules demand more from the people using them -- more imagination and more judgement. I guess that's why I like them.