It's All About Philosophy

DINO-PIRATES OF NINJA ISLAND is about more than savage beasts, cruel enemies and wild adventure! It's also about PHILOSOPHY! 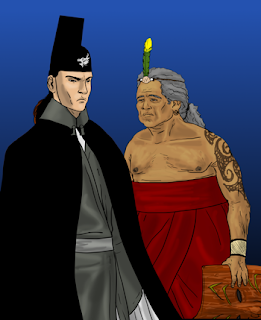 The parent system of DPoNI, True20, was designed to allow GMs to tailor their campaign's mechanics to their own tastes, so that nearly any genre or subject could be modelled. I've always loved these kinds of systems, going back to Fantasy Hero way back in the 1980's. I knew the style of story I wanted to be part of, and endlessly tweaked rules and especially magic systems to conjure forth exactly the feel I wanted.

So True20 provides the raw material, unformed, for us to build on. It also gives us organizing principles -- philosophies -- with which we can distinguish one type of magic from another. So we can have terrifying Imperial Sorcery, powered by secret incantations and sheer will, or we can have island shaman who speak to the spirits of nature to call fury down upon their enemies. A philosophy is pretty easy to define in True20: it has "canonical" powers, "barred" powers, some drawbacks and prerequisites. Here's a quick run-through of the philosophies provided in DINO-PIRATES OF NINJA ISLAND.


As we say: "Imperial sorcery is the fearsome power used by the eunuch sorcerers, formerly at the behest of the Emperor but now for their own foul desires. Ordinarily, this sorcery is only taught within the Empire itself, and then only to trusted servants of the eunuch lords."

Imperial Sorcery is the only philosophy that provides much in the way of direct offensive power -- Elemental Blast, Pain and Drain Vitality all make these sorcerers effective in combat -- but it is riskier, with a higher Fatigue save and an obvious display associated with the power's use. Imperial Sorcerers are never subtle foes, but they need backup if they're going to survive. Most such sorcerers surround themselves with minions who will never hesitate to leap in front of onrushing heroes (remember that in DPoNI, minions can automatically interpose themselves. Handy, that).

Inspiration: This magic is based on a lot of the bad-guy sorcery seen in Hong Kong films like Dragon Inn and Swordsman II. Whenever Brigitte Lin starts waving her arms around and looking fierce, somebody's about to have a boatload of Imperial Sorcery dropped on them.


"Originating in the Empire, but now found throughout the islands, this set of powers revolves around restoring balances in essential energies, or taking advantage of imbalances. Exorcising ghosts, curing diseases and repelling evil spirits are just some of the heroic practices of this art."

More supportive and less offensive than Imperial Sorcery, Heavenly Medicine allows practitioners to restore health and even life, to keep evil at bay and to speak with spirits, but it requires a certain amount of paraphernalia and mumbo-jumbo to pull off properly. Practitioners are not at their best in rough-and-tumble action, but when they have time to assemble their materials and direct their energies. They can provide their allies with potent benefits.


"Amongst the ninja, many clans develop the mental powers of their adepts, allowing them to cloud the minds of others, or to focus their own concentration so sharply that they can achieve supernatural states of alertness or ability."

It's true; ninja can disappear at will, walk through walls, and lead their enemies into traps. They do this with the power of concentration -- their minds rigorously focused and their thoughts resolutely trained. These powers allow for the development of ninja characters who can perform feats of superhuman athleticism, or those who draw a veil across the minds of their enemies. Illusion, trickery and strength of will are the tools of the ninja.


"Common on many of the islands, this form of magic depends on a close relationship with natural forces and spirits, as well as a fierce will to order external powers. Many tribes honour and revere their shamans, but it is also common for those with strange powers to be hounded from their communities and persecuted."

Control animals and the forces of nature (or "communing with" if you prefer the hippy version), shamans are capable of awesome feats. Especially in their preferred setting -- for the primary drawback of shamanism is the dependence on a particular location or type of terrain. Shaman characters must take the Power Focus feat, and limit their ability thereby. But with powers like Beast Link and Weather Shaping, they can definitely have an impact anywhere.

Inspiration: Storm from the X-Men, Beastmaster, heck, even Doctor Dolittle I guess. Those three would make a pretty fun dinner party, I think.


So there's a quick run-down of the philosophies available in DINO-PIRATES OF NINJA ISLAND. Of course if a player has a concept that doesn't fit any of these, feel free to make up more -- or just let the player select powers and build a character without any philosophy at all.
Newer Post Older Post Home