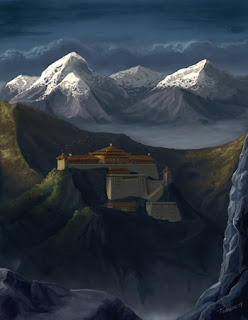 In one of my earliest campaigns (Hi Glenn!) my co-DM and I decided to send our party to an "alternate universe".

Anyway, we'd run a few sessions in this new world when Glenn came to me and said, "This isn't working."

"What?" I said, "It's going great. They're all after the paintings, and we've got this whole dungeon worked out..."

"It's not DIFFERENT. They're in ANOTHER UNIVERSE, but it just feels like the same old same old. Same monsters. Same weapons. Same everything. We have to make it different."

We did a bunch of stuff: we changed the technology so that the primary weapon types were different, we drew a new map with new place names and we changed a bit of the window-dressing around magic. We threw out all the existing monsters -- and Glenn figured out we could use the same statistics for a critter but completely change its description, so the players would have no idea what they were fighting.

But the best thing we did was we changed the names.

It was not entirely successful, since we hadn't put much thought into the names of the "original" universe, so it was the usual fantasy mish-mash of Latin-sounding, Anglo-Saxon stuff with lots of vowels for the elves. And lots of "K"s for the dwarves.

But for this world, we made up naming conventions for the different places. Inspired by a Dragon article, I came up with phoneme collections for the various locales, so that Osgipur names would be mostly generated from "ur"s, and "gip"s and whatnot, while Maeloch names had "och"s and so on. It sounds goofy, but at the time it really helped us deliver the idea that this place was all new to our heroes.

Creating a world is one of the things I find most exciting and rewarding about being a DM. You want to instill a sense of wonder in your players, but it's so easy to get caught up in grinding hit points, positioning and buffs and all that tactical stuff, that the "window-dressing" can get given pretty short shrift. Which in small doses isn't such a bad thing; you don't want to interrupt every action in combat with a discussion of how unusual the architecture is around here. But if too many sessions go by without that sort of ambience or flavour, your game starts to lose the unique spark that got your players excited in the first place.

I've always found names to be far and away the most useful way to establish the sort of atmosphere I want. Like Robert E. Howard, I make use of existing cultural associations to evoke particular ideas in my players. My scheming manipulators had Italian-sounding names while the imperialistic worshippers of a god-king sounded Egyptian. And I mix it up; my nomadic horse tribes used Aztec names. When running a campaign, one of my most trusted tools is a few pages of names for all my cultures, so that if I have to come up with an NPC on the fly, they'll have a name consistent with their origin.

You can go too far with this sort of thing, of course, and see your setting descend into mere cartoonishness, but I've always found that distinctive naming conventions the single best way to make my campaigns stand out. Probably why I still have this soft spot for Exalted, even after some very painful efforts to actually play it. Some cool-ass names in Exalted.
Newer Post Older Post Home