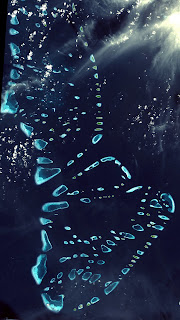 Here's a cool (and weird) image, of part of the Maldives from space. The Maldives are a chain of islands in the Indian Ocean, a little to the southwest of the tip of the subcontinent. On the other side of India, past the Sunda shelf (which incorporates the Malay peninsula and the large islands just off the coast; there is a gigantic flooded landbridge that connects southeast Asia and Australia) in the South Pacific, there are a lot of these kinds of islands too, called atolls. Atolls are formerly much larger volcanic islands, not unlike the Hawaiian islands, which have coral reefs build up around them, while the volcanic peaks, over millions of years, erode down and eventually disappear under the water. The coral reefs are a self-renewing resource, since corals continue to grow on top of other corals; after a while, the circumerence of the island is all that is left as a kind of hollow ring of low beaches and reefs, with a shallow lagoon in the center, which can often encompass many, many square miles.

Many of these kinds of atolls also feature dense vegetation, and some of the larger ones are inhabited in Polynesia, Melanesia, Micronesia, and elsewhere. Many of them, of course, are not inhabitated, as they are too small to support a population. In fact, the Tom Hanks movie Cast Away (not sure why that's two words, but it is) was filmed on an uninhabited island not unlike this (although it did still have a bit of a volcanic peak) from the Mamanuca island group in Fiji. The Mamanuca islands are about twenty islands, seven of which disappear completely under the surface during high tide.
A number of bizarre adventure ideas and sites for DINO-PIRATES suggest themselves by the idea of atolls. The Bikini atoll lagoon, for instance, was a ship graveyard prior to World War II, and now that the radiation levels from the old Bikini Island nuclear testing has faded enough, it's a kinda sorta popular diver attraction now.
Creatures lurking in the shallow lagoons, atavistic cultures isolated and marooned on shrinking islands over time... these are all great elements that could have a prominent place in a DINO-PIRATES adventure, if you wanted them to.
Newer Post Older Post Home