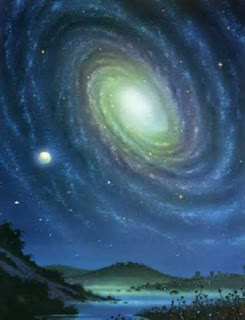 I've always been a guy who's imagination is sparked by vivid images. There's an image that's been in my head for over twenty years now, after first seeing it in a children's book about astronomy... when I was a child, appropriately enough. After looking for years for this book, the artist, or an online version of this picture, I stumbled across a good condition copy of the book in a used bookstore a coupla years ago, completely by accident. I scanned the one image in question, and I'll be posting it shortly, but my question is: if you were to integrate this image into your fantasy setting, what would you do with it?

Clearly, the image is a view from a planet outside of a large spiral galaxy more or less like the Milky Way. Perhaps the planet belongs to a solar system in a satellite minor galaxy, like one of the Magellanic Clouds, or perhaps it's merely a rogue star traveling through space completely on its own, yet close enough to a large spiral that on some evenings, when the moon is below the horizon or new, allowing for little light pollution in the sky, the spiral arms of a giant whirlpool galaxy fills the night sky.


Contrary to what you sometimes see in the movies, it's absurd to suggest you could actually see this rotating; the Milky Way, for example, has a radius of approximately 50,000 light years. The speed at which the outer arms would have to be moving in order to show visible rotation to someone outside is absolutely staggering... not to mention physically impossible. That doesn't mean that this would necessarily be a welcome sight in the sky. I imagine that folks would see this like the whirlpool that it resembles; they would fear the galaxy in the sky, and see it as evidence of the inevitable destruction of their world, it's final days to be sucked into the Void.


Meanwhile, I've got another idea for a sign in the sky. Our own moon, at least on the side that's visible to Earth (the moon is tidally locked, so we only ever see one side of the moon... but you already knew that, I'm sure) is covered with the remnants of vast, prehistoric lava flows. These lava flows stand out as darker gray "seas", or maria against the silvery color of the rest of the moon. If you look at the full moon long enough, and have a little imagination, you might be able to think that you see images in the pattern of the maria. This is the so-called man in the moon.


But what if it wasn't a question of being imaginative? What if the pattern of the moon's "seas" made a very obvious design that anyone could see and interpret? And what if this pattern were a symbol of death? 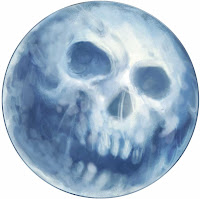 This picture was posted on the Paizo blog (or somewhere on Paizo anyway; I did a google image search to find it) is what I mean; a fantasy moon that looks like a gigantic silvery skull. What would happen in such a world when the moon is full?


Another direct question: any ideas? I kinda imagine what the ancient druids and later medieval peasants thought Halloween was; a night when spirits ran unfettered through the night, could be not just a yearly event, but a monthly one. The full moon is the night of the undead. But, that's a bit obvious. Any better notions? Post 'em!


I should offer some kind of prize to the person with the best ideas here or something, because otherwise I probably won't get any comments, but y'know what? I'm really cheap. So I'm not gonna. But seriously; please post your ideas here.
Newer Post Older Post Home