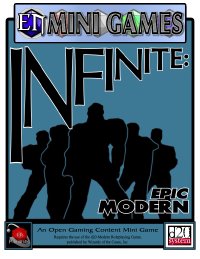 At last, here it is! The crown jewel of EN Mini-Games!

Every generation tells tales of heroes... men and women with prowess and valor far beyond the norm. But although modern man prefers to think of these tales and their protagonists as legends or exaggerations or outright lies, the truth is... giants still walk among us.

Welcome to Infinite, a minigame of Postmodern Pulp Adventure.

Legends Live. In Infinite, the line between man and myth, history and legend, is blurred. The heroes may discover that many of the fantastic characters from myth and fiction... from Victorian detectives to Pulp Era adventurers to modern super-soldiers... have real-world counterparts, although their exploits may have been misreported (perhaps intentionally).

Evil Waits. At the heart of Infinite is a secret cabal of unfathomable antiquity and unimaginable evil. The Hidden Masters have lurked in the shadows for millennia, secretly manipulating all mankind for their own devious purposes. In return for absolute obedience, they offer their servants the greatest reward imaginable... eternal life.

Heroes Arise. In every generation, a handful of extraordinary men and women stand against the Hidden Masters, wielding powers and abilities that push the limit of human potential. Infinite presents new rules for advancing d20 Modern characters beyond twentieth level, creating heroes and villains who will forge legends of their own.
Newer Post Older Post Home