This is Sugar Bush Squirrel:

If I had anything clever to add, I would.

But it's a squirrel in a Pope hat. What can you say?

Bruce Lee Statues: For Everyone 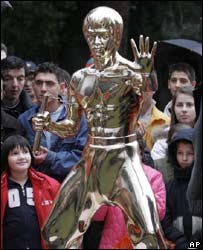 The Bosnian city of Mostar unveiled a bronze (BRONZE!) statue of Bruce Lee as a symbol of the fight against ethnic divisions.

"We will always be Muslims, Serbs or Croats," said Veselin Gatalo of the youth group Urban Movement Mostar.

"But one thing we all have in common is Bruce Lee."

Jane Siberry Is Cooler Than You

But I don't have to tell you that, right? Cause you already know. But maybe you didn't know that brilliant, uber-cool Jane is now selling mp3's online at her store. Plain old mp3's, no DRM here. And the pricing is interesting: Pay What You Like. Yep. If you want to take it all for free, you can. You can even "pay later" so after you've listened for a while if you feel like going back and topping up, you can.

THIS is where the music industry is heading, and the sooner the RIAA realises it, the happier we'll all be.