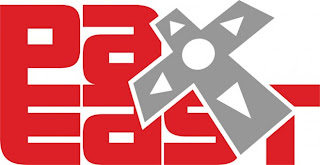 Well, the Scratch Factory team (that's me, in case you haven't been keeping score) joined a bunch of other indie game designers at the massive PAXEast convention in Boston last weekend. I was there to sell copies of DINO-PIRATES OF NINJA ISLAND.

I was a little trepidatious going in, since my model predicted I would only barely break even, and I wasn't sure my model was very reliable.

But away I went. And am I ever glad I did. I had a near-perfect result -- a complete sellout of my game on Sunday afternoon.

Using that model, and assuming another 80% drop to PAXEast (ten times again the size of Game Summit), it looked like I would see a R/A at PAXEast of less than ONE cent per attendee -- 0.6 cents, actually. That predicted I would sell 15 copies, earning just enough to cover the cost of the trip (with maybe $50 left over). It was a risk, but I figured I'd take it. I also figured I'd take a few more copies of the game than the model predicted. Live in hope and all that.

So I threw 21 copies (I don't count so well is why the funny number) in a box, jumped into a Honda Civic and rode down to Boston.

First of all, if you don't know, PAXEast is an AMAZING event. And I say this as someone who neither plays video games nor reads Penny Arcade. People are incredibly friendly, the staff are knowledgeable and there to make your time fantastic. The tabletop area, which is really a sideshow at this thing, is HUGE and utterly packed from morning till night, full of people having a blast.

Second of all, the gang I was part of, the Indie Bazaar, included some of the coolest game designers and people I will ever meet. Epidiah Ravachol, designer of Dread and Vast & Starlight, Emily Boss, designer of Breaking the Ice, Vincent Baker of Dogs in the Vineyard and Apocalypse World, Joshua Newman of Shock and Mobile Frame Zero, Meguay Baker of 1001 Nights, Rob Bohl of Misspent Youth and of course Jason Anarchy of Drinking Quest all had their crazy fantastic games on display, and virtually everything sold like the proverbial hotcakes.

Frankly, if we'd offered FREE HOTCAKES I doubt we could have done better.

I sold the last copy I had of DINO-PIRATES OF NINJA ISLAND on Sunday afternoon -- a perfect result. Selling 21 copies instead of 15 produced a Revenue per Attendee of 0.9 cents, which means my predicted number was off by 0.3 cents. I think that's a very respectable margin of error (even if it is nearly 50% of the actuals).

Having my expectations set ahead of time really helped to reduce my anxiety, especially on the first day when Drinking Quest and Mobile Frame Zero were flying off the shelves but it seemed like everyone was turning their noses up at my pulpy baby. But I hung in there and Saturday was much better, just like my model had predicted.

And I learned new things. Games like Drinking Quest and Mobile Frame Zero are so easy to sell: their unique offering is easy to grasp immediately. While people invariably laugh when they hear DINO-PIRATES OF NINJA ISLAND, they can't so easily engage with the concept, and not everyone is going to sit still and listen while I explain it.

I doubt I could do much better with this game, no matter how I marketed or sold it. I have a few copies left which I'll take with me to the Calgary Entertainment Expo in April and sell, and then that will be it for the print version of DINO-PIRATES OF NINJA ISLAND. It's been a great learning experience, and the lessons I've acquired here I'm going to put to good use when the time comes to start selling REFORM SCHOOL NINJA GIRLS.
Newer Post Older Post Home