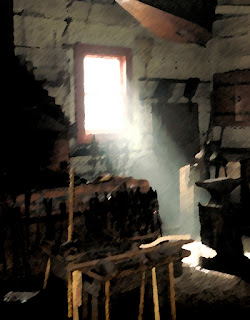 A thousand years ago, rumour spread that the greatest swordsmith in the land had created four perfect blades. Stronger than any other swords, sharp enough to cut through stone, and as beautiful as the sky at noon.

Rumour reached a gang of heartless bandits, who rode that very night to the swordsmith's home and demanded he give them the swords. He refused, and they cut him down and took the Four Demons for themselves. They butchered his family and burned the entire town to ashes.

In the years that followed, made unstoppable by these peerless blades, the bandits unleashed hell on earth, cutting down all who stood in their path. They revelled in slaughter and nightmare, and the land itself ran with blood. Only once they fell to fighting amongst each other did the reign of terror finally end. All who'd heard the rumour cursed the smith who'd made those blades.

But the rumour had been untrue. The smith had not made four perfect blades.

This is the story of the fifth sword, the only weapon that could stand against the Four Demons...

And now, a thousand years later, the Four Demons are stirring once more. Only the Steel Angel can stop them -- if a hand can be found to wield it.

Great, because what I need right now is ANOTHER idea.