While it's possibly a bit gauche to be so self-promotional, I'm going to do it anyway, since Corey hasn't.


The Barsoom in barsoomcore has made a return. A Lulu.com version of the wonderful ENWorld story hour, Barsoom Tales was recently released, in it's entirety (and now, with more grandma-unfriendly language!) You can pick it up here at this link from Lulu.com. I actually recently did so. Yesterday, I finished re-reading it. You probably need to follow the direct link; for some reason when I search Lulu, I can't find it (although a Google search brings it up. Lulu must have a crappy search engine.) I just reviewed it on my personal blog, but I'd like to spend a bit of time talking about it here too. 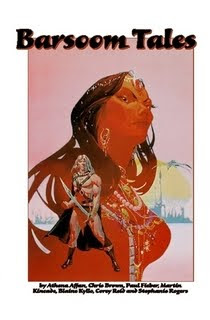 Barsoom Tales is not exactly a novel per se, (despite its appearance as one), it's a story hour, and even Corey himself has said that that "genre" (if you will) is a difficult one to work in for reasons that cause it to frequently fail as an interesting read. Barsoom Tales is an exception to this; it is primarily the story of relationships; relationships between Arrafin and Yuek Man Chong, Arrafin and her best friend Elena, Elena and her good friend slash surrogate brother Isaac, to say nothing of the entire group's occasionally strained relationship with Nevid, Zuleika, Étienne and others. Sure; it still reads like a game report in some ways (plot often meanders reflecting players finding new focii to harry off after, main characters seem to come and go in occasionally unexpected ways, main characters can die in completely unexpected ways due to blown saves or whatever, etc.) But I think it's a good read.


And... the setting. I know Corey's been all about DINO-PIRATES OF NINJA ISLAND lately (and who could blame him?) but I've always found his version of Barsoom to be a brilliant bit of setting design. Plus, it coincides very neatly with my own tastes, and when I first started hearing about Barsoom, it was eerily similar in many respects to what I was working on at the time (the very earliest versions of DARK•HERITAGE, the setting I've been tinkering with and running off and on ever since then. Even when I'm not; it's ended up being a cannibal setting that gobbles up almost all of the other settings I've done before and since, incorporates many of their elements and then spits out the rest like little owl pellets to be discarded.)


While there are some very obvious nods to the original Barsoom (red guys who wear nothing but leather harnesses, banths, lots of desert terrain, etc.) there are some equally obvious nods to Glen Cook's The Black Company; especially in that everyone who knows anything at all about magic (with the exception of the player characters, who have to approach it as neophytes after believing that there was no such thing) is scary, paranoid, and plain disturbing. These guys would get along great at a mixer with The Limper, Soulcatcher, etc.


My own setting design efforts were influenced by Barsoom in ways both significant and not. As an example of the former, I actually hadn't read The Black Company until I read Barsoom Tales (in its serialized ENWorld format) but its characterization of insane übersorcerers turned me back to Glen Cook (after trying but failing to read it previously.) That has since become a favorite plot device of mine as well. As an example of the latter; despite the fact that I speak Spanish and lived in South America for a few years as a teenager, it never occured to me to intersect my love of fantasy and my love of Mediterranean culture until reading of all these Saijadani characters with their cities of Pavairelle, Cadençia and others. I was actually quite captivated by the Old World, almost Medieval-sounding Spanish/Italian/Provençal names of characters like Collete de Orofin, Isabella del Maraviez, Philip de Guzma, Isaac del Valençia, Elena de los Santos, etc. My own Terrasan Empire, the polity under which much of the developed section of the setting operates, was started on this path by Saijadan--later coming to more closely resemble the historical Crown of Aragon.


And last but not least, while I was struggling from almost the very beginning of the Third Edition rules era with the D&D magic rules, which I didn't like, it hadn't quite occurred to me to be as drastic as Corey had been and just remove them entirely. The original Barsoom campaign started play with, basically, just the fighter, rogue, and expert character classes available. I'd like to think I would have gotten there eventually (probably at some point after picking up the d20 Call of Cthulhu book and deciding that I like every aspect of the magic system there better than that in D&D) but Barsoom helped me arrive much faster.
.
So, Barsoom is pretty significant to my own gaming; if I were to make a list of a dozen major influences, it'd have to be on that list (along with the original Barsoom, curiously). I like it. I recommend it. I think gamers in particular would have a great time reading a story that reads almost like a novel, but which has its genesis in a game session not unlike those that they play. And I think they'd like seeing how the gaming medium can be used for a lot more than the usually rather shallow kinds of tales that are the end results of most campaigns--the randomish drive to explore "dungeons" and ruins for treasure, or whatever. Barsoom really set a new benchmark in campaign play that is rarely equalled in most people's games (I'd venture, based on my own experience) and even more rarely documented so nicely as it is here.
Newer Post Older Post Home