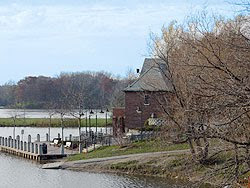 I haven't posted on this blog in quite some time, but since my own blog is hosting a few protracted "series" of posts right now, it seems that an unconnected thought about running games might be more appropriate here anyway.


Today I left work mid-morning to go to a routine doctor's appointment. Walking from my building to my car, I was struck by the thick mat of fallen leaves that covered the sidewalk and lawn near the parking lot. I was able to take Hines Park Drive, a wooded road that runs through a long park for several miles, and I observed the fall colors all the way there. This has been a weird season, with temperatures cool in September and a prolonged Indian summer through much of October, so our peak color season was short and early (and unusually warm.) Today we were past peak, of course. Few trees were still vibrantly yellow, orange and red (although isolated trees or stands still were) and many in fact were almost completely bereft of leaves; their branches were grim, gray claws pawing at the sky. A few still had a handful of exposed leaves high in their boughs, trembling as their time to die comes due.


Some trees were still green, although it was a dry, olive green. And many trees are various shades of brown; tan, rusty orange, deep russet. It was a windy day, so leaves filled the air, passing a hundred feet over my head like deformed birds, while many others raced and danced across the road, chittering and rattling as they went. To complete the picture, perhaps heavy clouds like a mat of steel wool should have covered the sky, but it was instead completely clear; the azure sky fading to nearly white at the horizons and harsh sunlight bathing the entire scene in bright light that caused me to squint most of the drive. I put on some suitably moody old music (Ultravox's Quartet) and enjoyed my drive to the doctor's.


Weather, climate and seasons are an integral part of our day to day lives. How often, however, is that true for our characters? How often do we even bother to describe conditions at all, and even if we do, how often do we make that something that matters? What's the impact of traveling during the rainy season? In a hot, tropical forest? Up on a subarctic island? High in the mountains?


Almost every time I'm outside, especially in areas of interesting or unusual scenery or weather, I think what an amazing scene this would make for a fiction writer. Or for a gamemaster looking to add a hint of verisimilitude to his otherwise sunny, pleasant campaigns. And yet, I don't always remember to bring that kind of climatic diversity to my games when I'm running them. It does, however, cause me to appreciate the day to day small things in a new and unusual way, so at least there's that.


This is an easy detail to overdo… it's meant to evoke imagery, and occasionally prompt a thought of preparing for the weather or dealing with the consequences of it, not over run your campaign with worrying about details… are my character's clothes warm enough? Am I prepared to deal with malaria, etc.? But a little goes a long way towards making your games much more interesting.


The picture, by the way. I didn't take it. But I did drive right by that building, and that picture was taken a few years ago at about this same time of year. Maybe a few weeks later.
Newer Post Older Post Home