Not Really A Fan

FanExpo is completely insane. It's full of, well, of fans, I guess. Fans of Star Trek. Fans of assorted anime titles I've never heard of. Fans of Freddy Kreuger, Call of Duty, Spiderman -- in short, fans of anything that might be represented in a ridiculous (or awesome) costume.

I'm not particularly a fan.

Oh, I like Spiderman well enough. I've been known to watch assorted anime titles you've never heard of. I don't really care for Star Trek, to tell you the truth, but on the other hand, I really dig Steven Erikson. But I wouldn't call myself a fan.

I wouldn't dress up as Steven Erikson, that's for sure.

So it's not so much my thing but I did in fact have a blast at FanExpo. I ran a couple of sessions of DINO-PIRATES OF NINJA ISLAND, of course, that went splendidly (the PIRATE KING face-planted both times). Sara McMillen and the other great folks at TAG kept that whole arrangement smooth and pleasant, but I had an ulterior motive in attending this insane event.

I was looking for artists. And artists I found.

First up, I met Neil Chenier, He's a local guy working on a book called "Gangrene" he and his writer partner have sold to Markosia. He had pages on display that looked fantastic -- sort of gore-porn noir, if you can picture that. Severed limbs and trenchcoats a-plenty! 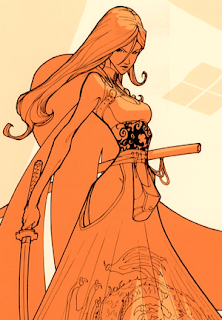 I walked around a bit and had my eye caught by this striking image by Eric Vedder, whohas an entertaining webcomic called Aardehn. I picked up a copy of a print of this image for S, and Eric and I got to chatting. Eric has, as you can see, a great classic comic-book line married to the sort of exaggerated form and high detail I expect from manga illustration. Very cool stuff, and his sketchbook was a prized acquisition.

Day Two I ran into the very charming Mark Rehkopf, and his astounding dinosaur illustrations. He builds full-scale dinosaur models! Holy Moses! And covers for the Prehistoric Times! Obviously I could only just restrain myself from slobbering all over him and his lovely work. I think I loved his pencil dinosaur illos the best. I would totally buy a book full of those. So evocative and enthralling. 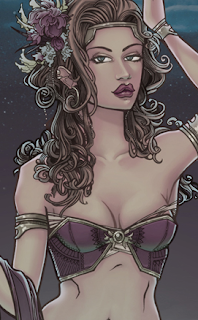 A few rows over from Mark, I was yanked from my prehistoric reverie by the startling character pieces of Sanya Anwar. A lot of people try to do the Art Deco thing, but it was her expressive line work and knack for telling character details that really caught my attention. She described for me the new version of 1,001 Nights that she's doing, using folk tales from all over the world, and it sounds amazing. I couldn't resist, and ordered a commision from her which she turned around and made into a beautiful anniversary gift for S. Fantastic.

I was pretty much done by this point, but anyone would have been distracted by a comic book called Kill Shakespeare -- I spent some very pleasant minutes chatting with Conor, one of the writers. It's a fantastic idea and the first two issues are very well done. I strongly recommend looking this book up -- you don't have to be a Shakespeare fan to love it!

I don't know much about art, but heck, I know what I like. Which is mostly dinosaurs and chicks with swords. FanExpo honestly could have used more of both. And less Star Trek.
Newer Post Older Post Home