I Screen, You Screen

One of the things I love about RPGs is all the paraphernalia. Of course the polyhedral dice, rattling across tabletops, and on occasion miniatures (though I lack the patience/time to paint my own), but folders, charts, maps and especially screens. 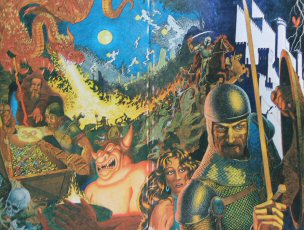 DM screens are a staple of many game systems, and even though I rarely have papers or anything I want to hide from my players, I love those folding cardstock thingummies. One of my favourites of recent years is Green Ronin's Narrator's Screen for True20. It's attractive (without goofy illustrations on the front (although I'll admit, the illos on the old-school screen (at left) impressed twelve-year-old me)), and the design is well-laid-out and it's made from extra-sturdy cardboard so it doesn't get as flabby and useless as some other screens I've made use of over the years.

But as I pointed out a while ago, it lacks at least one basic necessary for smoothly running True20 (damage conditions). And as a screen for running the rambunctious sort of game DINO-PIRATES OF NINJA ISLAND is meant to be, it's missing a whole pile of stuff.

So I've created a bodgery of a document that you can print off and use to update your True20 Narrator's Screen. It includes tables for the revised rules around Stunts, Reputation, Scenes, Minions and more! Just cut out the little boxes and tape them over the boxes indicated on your Narrator's Screen, and hey presto! You've got your own perfectly-arranged DINO-PIRATES OF NINJA ISLAND Narrator's Screen.