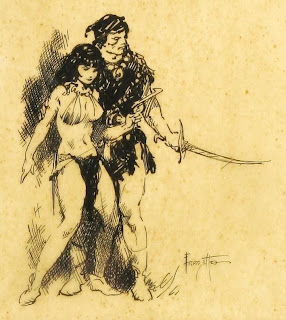 While barsoomcore has just told us about what makes good science fiction, I have to admit to a fondness for bad science fiction. For fun, I've read a few books on science fiction authorship and writing over the years, and most "real" science fiction writers are somewhat disparaging of the concept of a space opera; a science fiction story in which the science is nothing more than the trappings. If the same story could rather easily be transplanted into the Western genre with a few superficial amendments, in other words, it's not "true" science fiction. True science fiction has, at its heart, the science, and the plot resolution, and in fact the main conflict and thrust of the story should be dependent on it. In their words.

Of course, a lot of these books were written in the 60s and 70s. Post Star Wars people are not nearly so disparaging of space opera anymore for obvious reasons. Even writers of books about authorship are not immune to the siren call of financial success over integrity to a tightly defined artistic ideal.
And yet, even so, in the most apparently transient and vacuous adventure story, the fact that the work has characters means that at some level, there's an exploration of what it means to be human. In fact, in some of the worst of these novels, there's something salvageable along the lines of "what exactly is going on between the lines here where these completely wooden and bizarre characters are put forward as supposedly reasonable people?"
Some of the better pulp adventure stories "back in the day" were fairly obvious metaphor's for situations in our world... Leigh Brackett and C. L. Moore's native Martians and Venusians were much like the inhabitants of colonial Africa, Asia, or the indigenous Americans as the nation pushed westward.
Really, I think any science fiction (even the bad stuff) succeeds on some level, because by divorcing concepts from the reality to which they're so intimately tied in our perception, we can stop and have a look at these concepts in a more abstract way, a more objective way, and see where that gets us. I recently read Gardner F. Fox's Warrior of Llarn and Thief of Llarn, a somewhat lackluster Barsoom rip-offs (although the first book had a Frazetta cover and frontspiece, so it's worth it for that at least. I've attached the frontspiece for fun here). Llarn is superficially Barsoom-like as a setting, but one key difference is that it got that way after a devastating nuclear war. The heroic Barsoom-like state is actually a post-apocalyptic Dark Age for Fox. His hero, Alan Morgan, is a callous, dumb jock (written a little tongue-in-cheek, I presume, although the parody is subtle) which calls into question what kind of person succeeds at these types of ventures, really. And although he's certainly a very capable fighter, his greatest trait is his unbelieveably good luck. The nuclear war metaphor was a bit thick at times, but hey... it was the mid-60s. Hardly any science fiction from those times didn't touch on it in some fashion or another.
I can't exactly recommend the Llarn books... they barrel along without much in the way of character development, deus ex machina is a perfectly acceptable tool to keep the plot moving when a good explanation and exploration of character motives would take too long, and it occasionally pauses and does a tour-guide like monolog of some setting element or other that Fox wants to showcase or highlight. On the other hand, it's a very subtle dig at the Burroughs tropes and, like I said, there's a potentially interesting discussion to be had about why the book might have been written the way it was.
Newer Post Older Post Home