Dave has shut down the Long Box. I am sad. 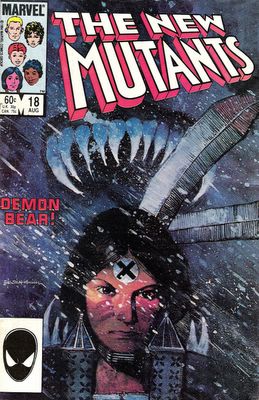 Dave has provided some of the biggest laughs I've had on the Internet since this whole thing began. But it was his review of NEW MUTANTS #18 that really cemented the one-way relationship. That post marks one of the few times I've ever been compelled to comment on someone's blog post. God I loved that comic.

There's a gift that some people have of being able to illustrate the essential goofiness of something without betraying it; they see the goofiness, and they can show you the goofiness, but they still love the goofiness. They love it BECAUSE it's goofy -- but not in a campy way.

Somebody over on Circvs asked me why I love pulp stories and my answer swerved around this stretch of road. I said something about how I love stories in which the self-importance and essential goofiness of human existence is illustrated, but at the same time the heroic view of the universe is maintained. There's something that happens inside my brain when I read Dejah Thoris shouting "Fly, Sola! Dejah Thoris remains to die by the man she loves!" that manages to simultaneously expand and implode.

Which probably explains the expression on my face at the time.

It's hard to explain Dave's consistent funny. Quotes don't do his posts justice, because he's so good at set-up and then paying off with goofy lines like "Mandroids: big, loveable, and yellow. Just like Big Bird."

See? On it's own, that's not funny. But you read the mandroid post and I tell you, you're dying.

Steph said she recalled some hilarious She-Hulk post. I couldn't find it, but I did read a lot of funny stuff.

I will restrict myself to two of the greatest posts Dave (or any other blogger in the HISTORY OF THE INTERNET) ever wrote:

Clean Underwear Tuesday: Honestly, I don't even know what to say. SIGN SEZ STOP PLEEZ. If that doesn't crack you up, you need a new brain, dude.

No Post For You, Dr. Jones!: Well, there are bears in this one, too. But I tell you, if there were any justice in this world, "Sometimes bears win," would be a total catchphrase.

Thanks, Dave, for three years of hilarity. I'm really glad you're making a living at this now. Those bastards at ABC are lucky to have you. Milk 'em for all they're worth!
Newer Post Older Post Home