You Can't Go Back

Once you've opened the Dino-Pirate door and peeked inside, there's just no turning back. 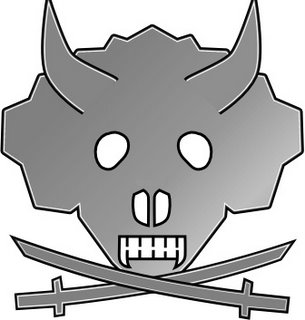 So I have learned, and I pass my tragic lesson on to the rest of you as a public service -- do NOT bite off the Dino-Pirate mouthful unless you're prepared to spend some time there, because it won't bloody let you go.

I am well-invested in running an Iron Kingdoms game. I've bought numerous (incredibly gorgeous) hardcover books detailing the world. Rules. Monsters. Spectacular illustrations. The COOLEST commercially available setting I've ever seen -- the only one cool enough to make me buy it.

But I can't. Steph started me thinking about it, and she's right. Damn her.

So instead of that substantial investment paying off in nights of gaming joy, I find myself compelled to run a Dino-Pirates of Ninja Island campaign. I can't get it out of my head.

It was never supposed to be a full-fledged campaign, damnit. It was supposed to be a goofy one-off, good for a night's gaming. And now it lurches into life, moaning and chuckling to itself. And I can't let go of my own Frankenstein monster. I hope the good, incredibly talented folks at Privateer Press aren't offended.